Bobblehead Dad: How I Told My Kids I Had Cancer

You’d think it would be simple to get an official cancer diagnosis if, in fact, you had the big “C.” It wasn’t simple for me, however. It was a six-month journey during which blood tests “looked suspicious” and biopsy after biopsy revealed nothing. Details of a prostate biopsy aren’t something you want to hear about, so let’s just say it feels like you have electrical probes shoved up your bottom hatch only to be followed by a doctor setting off a colossal Fourth of July fireworks show in there. I have never sweated—or shed tears of pain—so much.

The first three biopsies didn’t find any cancer cells. By the time they did the fourth biopsy, I honestly just wanted some resolution. Good or bad. Unfortunately, I got my wish one Sunday afternoon when my doctor called me out of the blue to go over my results.

When I heard his voice, I knew what the news would be.

He gave me a bunch of medical information. Numbers. Doctor talk. I had him repeat everything a couple of times so I could write it down. In an instant, a disease I had been reading a fair amount about suddenly moved from the remote “third person” perspective to the intimate “first person” one. And I was that person.

Who do I turn to? I thought. The only people at home were Kevin and Drew, fifteen- and nine-years-old at the time.

He told me to call his office the following morning to set up an appointment for Tuesday so we could discuss our action plan in person.

“Try to enjoy the rest of your weekend,” he said before we hung up. What else could he say?

I couldn’t move after finishing that call. Moving meant leaving the past behind. Moving meant facing the reality of the future. But standing still—frozen in the moment with the phone still in my hand—also made me aware of how alone I felt at that moment. Who do I turn to? I thought. The only people at home were Kevin and Drew, fifteen- and nine-years-old at the time. Wallis, thirteen-years-old, was on her way home from a volleyball tournament in Minnesota.

Months and months of emotions began to percolate up from my secret hiding place deep inside. I feared I was about to explode emotionally—something I didn’t want my two boys to witness—so I got myself outside, to the porch on the back of our home. It was an insignificant place I had walked through hundreds of times en route to someplace else. But that day it became the venue for the meltdown of my life. Curled up on the floor, with my knees pulled up to my face, I pressed up against the railing and sobbed.

I found myself wondering how my dad and brother reacted when they found out they had cancer. I was sure they didn’t end up on the back porch in a fetal position wailing like me. They were strong. And as much as I wanted to be strong, right then I also just wanted to cry. I wanted them to call out to me and tell me what to do.

“Dad!” I heard faintly through the back door. It was my son Kevin shouting for me.

I didn’t want to be busted on the porch so I cracked open the door and yelled back into the house, “I’m outside. I’m on the telephone!”

I had forgotten that Kevin and Drew had their weekly batting practice at an indoor baseball clinic about thirty minutes away. And we were going to be late.

Batting practice, as it turned out, was a good distraction for me. Sitting and watching them play ball gave me the time I needed to sort things out in my head. It was my first experience in living my life with cancer. I was surprised at how settling it felt simply to be there.

I decided I couldn’t panic. I needed to tell people in a thoughtful manner. I needed to get organized for my doctor’s visit in a couple of days. And I needed to try to reclaim a little bit of normalcy by making dinner for my family.

I’m not a cook, but that night I cooked. It was during our lemon chicken dinner—with my secret still safe—that I finally allowed the spring under my bobbling head to snap.

Unable to bobble, I could now relearn to live.

Later that night, I went up to Kevin’s room to tell him about my doctor’s call. Kevin was always a mature kid, and I know what I had to say added ten years to his 120-pound frame.

Unfortunately, it was Wallis who I caught off guard. I took her into the living room, the Granny Smith green living room, and sat her on the couch. I ignorantly wasn’t prepared for her reaction. In retrospect, I see that she was a child who had lost her grandfather and uncle to cancer in the previous few years and now, here was her dad, dropping another bomb in her life. She came undone. And the only thing I knew to do was to hold her in my arms, allowing her to cry until there were no more tears.

My emotional well was empty. It was late. Talking to Drew would have to wait until the next day.

Excerpted with permission from “Bobblehead Dad: 25 Life Lessons I Forgot I Knew” due in June. 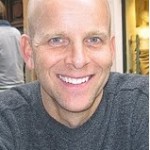 Jim Higley is the Bobblehead Dad – writer, speaker, life observer and cancer warrior. His favorite role, however, is being “Dad” to his three kids. Jim writes a weekly parenting and family column, Bobblehead Dad, for Chicago Tribune’s TribLocal. He also is the author of Bobblehead Dad: 25 Life Lessons I Forgot I Knew. Read more about him at BobbleheadDad.com.

Previous Entry: How to Help Your Spouse or Partner Who Has Cancer
Next Entry: What I Was Looking for When I Googled “Parenting with Cancer”