Not Done on Earth, Thank You Very Much 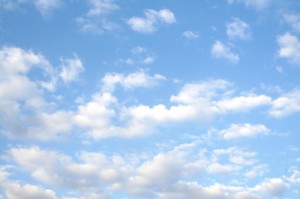 WARNING: May flip out the newly diagnosed. Proceed at your own risk.

“How many of you believe in Heaven?” the priest asked the congregation at the funeral I attended last week for my sister-in-law’s father.

Most people raised their hands.

“How many of you believe that it’s a good place to go, where you’ll be happy for eternity?” he asked.

Again, most people raised their hands.

“How many of you want to go to Heaven today?”

Nobody raised their hands.

The priest asked, “Why not?” And then proceeded to explain that we all have a fear of the unknown. Blah, blah, blah.

Not me. I have a fear of the known. And here’s what I know: If I die and go to Heaven today, I will not be here to raise my children — something I came awfully close to four years ago when doctors found a tumor the size of a softball in my chest.

I wanted to interrupt the priest’s homily, to tell him and the entire congregation that while Heaven sure sounds lovely, I have responsibilities here on earth — two of them — and they aren’t done being raised.

I wanted to tell him how I felt last month when I went to the funeral of a mom like me, a mom who had hosted the class mom get-togethers when our sons were in kindergarten together. We’d flip through Oriental Trading magazines and gobble down coffee and cake, using planning the kindergarten Halloween party as an excuse to put down our work and our mops and steal an hour or so together before the school bus returned with our kids.

But she died of stage IV ovarian cancer last month, and so my son and I found ourselves at her funeral, he in a jacket and tie I’d insisted he wear. I left him near the front door with about a dozen other sixth grade boys (none in jackets or ties, he pointed out),  including my fellow class mom’s son, who has grown so much since kindergarten, I hardly recognized him.

As I snaked my way through the crowd, hugging person after person that I recognized from town, I realized, This could have been my funeral. And suddenly, I stopped walking. I stopped hugging people. I stopped looking at photos of my neighbor on vacation, on Christmas, at the school where our sons were in kindergarten together.

I stopped and thought about my own kids four years ago, when I was just two months from what could have been my own funeral.

And yet my neighbor is gone and I’m here.

So Father, I’m certain that Heaven is a wonderful place, especially with my dear neighbor there now. But I have two children to finish raising, and I’d like to stay here on earth until they grow up. And it’s that known that I fear the most.

Previous Entry: How to Ask for Help When You Have Cancer
Next Entry: Sick People Can Be Good Parents Too