I wrote this one for GoodHousekeeping a year after my cancer treatments. With another round of blood tests due, I thought it was a good time to post it here: 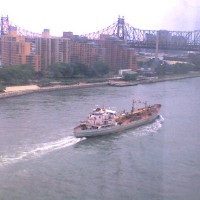 When I spotted the boat full of tourists, waving maniacally toward the hospital, I thought, Bozos.

Granted, they probably had no idea they were extending their enthusiastic greetings in the direction of an oncology floor — the one where I had spent much of last June and part of July. But as I waited in traffic to get to my oncologist’s office for a blood test that would determine if my tumor had returned, I didn’t feel like cutting these folks any slack. I guess I still get angry sometimes, especially this time of year.

My calendar from a year ago starts out normal. There were baseball games, barbecues and deadlines. Soon though, there were doctor’s appointments and then…nothing. Nothing but day after day of blank space on my calendar, while I laid in my hospital bed, watching New York City’s East River below, and wishing I could switch places with the people on the boats.

When my husband came to visit, he grabbed the marker for the wipe board where the nurses write their names, and added:
High Tide — 6:36 p.m.
Low Tide — 6:22 a.m.
Water Temperature — 72 degrees
Then he drew a palm tree and a beach chair. The nurses loved it.

My brother and my friends later added a schedule for our fictional riverside activities, including Boat Wake Surfing, FDR Drive Traffic Dodge and my favorite, Rat Toss.

“I was the only patient on the oncology floor who was born after President Kennedy was shot. Heck, I was the only one who couldn’t remember nylon rationing during World War II.”

They all knew I’d much rather be at the beach with my kids than lying in a hospital room with dying octogenarians, worrying that I might die, too. At 40, I didn’t feel like I belonged there. I was the only patient on the oncology floor who was born after President Kennedy was shot. Heck, I was the only one who couldn’t remember nylon rationing during World War II.

So, I looked out the window. I watched the water taxis ride by. I saw ferries head for Yankee Stadium upstream, and one night, I heard a party boat sail by, music blaring. I even watched the Macy’s Fourth of July fireworks beyond the Queensboro Bridge with my face pressed up against the window and my chemo pole at my side. I knew that I belonged out there along the river with all the other moms celebrating the holiday with their kids.

Now, nearly a year later and months into remission, I had another doctor’s appointment on my calendar. My blood test would measure tumor markers, substances that indicate that cancer might be in my body. While the tourists waved from their boat toward the hospital’s oncology floor, I parked my car, walked to my doctor’s office and rolled up my sleeve.

And for the next few days, I held my breath.

“Jennifer,” my doctor said when I answered the phone some 48 hours after my appointment. “It’s all clear.”

I’m filling up this year’s calendar with baseball games, barbecues and deadlines. This year, I’ll have real activities on the beach. And then I’ll have a PET scan to make sure the cancer hasn’t returned. Until then, though, I’ll be thinking about the patients watching the river from the oncology floor.

Previous Entry: Her Channel Profile: ParentingWithCancer.com
Next Entry: Got a Friend with Cancer? Just Be a Friend.