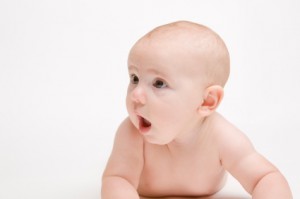 As soon as I emerged from my bedroom, Jacob went pale. He looked as though he’d seen a strange bald man with bushy black eyebrows in a gray suit in my upstairs hallway. What he saw, however, was me, dressed as Dr. Evil for Halloween.

“Jacob, it’s me, Mrs. Singer,” I squatted down to assure my seven-year-old neighbor that a scary-looking man hadn’t just clomped down the hall toward him, intending to dismember him and sprinkle his body parts on the lawn as Halloween decorations, as the look on his face suggested he’d thought.

“Remember how I’m bald from cancer treatments?” I said. “I thought I’d go as Dr. Evil for Halloween. Isn’t that funny?”

He laughed nervously, but I could tell that he didn’t think there was anything funny about the whole thing. Also, that he had no clue who Dr. Evil is.

Worse, my own son let out a little frightened gasp when he saw me, until he remembered seconds later about my Halloween costume plans. And he’d seen me bald before.

Maybe this isn’t such a great idea after all, I thought. Maybe it’s not funny to answer my front door on Halloween dressed as a bald man, simply because I was a bald woman with a sense of humor. I thought I’d be saying “In your face, Cancer! I’m bald and I’m an evil doctor! Get it?” I thought that my family and neighbors would laugh along with me. Some of them did:

“Hahahahaha, Jen! Hilarious!” a few friends offered while their kids accepted candy from me. Others just stared, as if they were wondering whether I’d shaved my head just for the holiday. Still others looked away, as though my shiny cranium might burn their eyes like a solar eclipse.

I was scaring people…but for the wrong reasons. It wasn’t so much a Halloween prank as a stark reminder to the middle-aged among us of our mortality. No doubt it prompted a few conversations that parents who’d dropped by would have to bring up later on, while their kids sorted their candy in silence.

“By the end of the night, I couldn’t wait to put away my Dr. Evil costume and put my headscarf and earrings back on.”

It was scary. It was funny. It was all that at once, and inside, my feelings felt jumbled.

In your face, Cancer! Or was cancer in mine? Maybe I just should have gone as Britney Spears.

By the end of the night, I couldn’t wait to put away my Dr. Evil costume and put my headscarf and earrings back on. I couldn’t wait to feel feminine again, and to stop making kids go pale with one look at my head. But I’d made the best of the worst Halloween I’d ever had — or at least I tried to.

The next morning, I awoke to stubble on my head, the first hair I’d seen up there in months. I rubbed my hand over my head, admiring its new rough feeling, and I thought about how I’d answered the door over and over again the night before while dressed as Dr. Evil. I thought about Jacob and my own son, about my glued-on bushy black eyebrows, about the idea of making light of a rotten situation. I thought about my hair making its long-awaited return, and admired the five o’clock shadow on my head.

I looked at myself closely in the mirror and I thought, Hahahahaha, Jen! Hilarious!

Share and Enjoy:
Posted in For Friends & Family, For Parents, For Spouses & Caregivers | Tagged bald, Halloween

Previous Entry: Did IVF Cause Giuliana Rancic’s Cancer or Help Find it?
Next Entry: Today is My Birthday. I am 4.