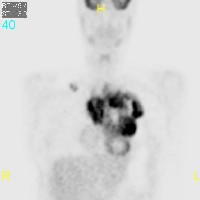 The PET scan that would come to reset my birthday.

The date of my actual birth, the one on which my parents decided not to name me Robin after all, because it reminded them of the TV Show Batman, is January 8th, Elvis’s birthday. I’ve always wondered if I were to show my birth certificate to the guards at Graceland, if I’d get a special tour.

But today is a different kind of birthday, the fourth anniversary of the day I finished my cancer treatments. My “cancerversary.”

I’d like to say that the fall leaves appeared brighter and the air crisper on my ride home from the radiation oncology center that day. But I wouldn’t find out until January that I was in remission, when it was finally safe to have PET scan without worry that the radiation stockpiled in my body would skew the results.

On November 9th, 2007, I was in limbo, somewhere between the hell of chemotherapy, hospital visits and agonizing bone pain and the combo platter of relief and fear of recurrence that is remission.

Today, however, is different.

I’ve long made it past the two-year mark when the odds of recurrence for the kind of aggressive non-Hodgkin’s lymphoma I had — the one that had stuck a tumor the size of a softball in my left lung — dropped precipitously.

Earlier this year, I had my last routine PET scan — 14 in all. My oncologist said that the risk of radiation was no longer worth the vigilance. If I feel fine, I probably am fine. We take blood tests for tumor markers just in case, of course. And every bout of bronchitis or nebulous lymphoma-like symptom (fever, chills, itchy skin, fatigue) comes with scrutiny that “normal” patients don’t have to endure. Also, a chest x-ray.

But today, my platter has more relief on it than fear. I have a greater sense of calm, one that I had tried so hard to capture at my “Kiss Cancer Goodbye” fundraiser for the Leukemia & Lymphoma Society two years ago, featuring the Sugarhill Gang: 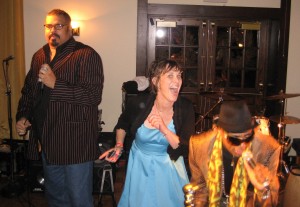 I was celebrating making it to another milestone.

But I still lived with the Sword of Damocles hanging over my head, fearful that the next PET scan would bring with it bad news. That I would be the star of that heart-wrenching story that begins, “Just when she’d made it into remission….,” and ends in a hospital room.

I’ve kept up the hard work of sifting through just what it meant to come two months from death at age 40, to wonder if I’d get to see my kids grow up. Now that I’m four years out, it’s easier to see things as they are and as they should be.
As my friend Heidi Adams, survivor, founder of Planet Cancer and Director of Engagement at Livestrong so eloquently said:

“If I ever now am having a difficult time dealing with a situation, I just say, ‘What would I do if I were in treatment? If I were re-diagnosed tomorrow, how would I deal with this situation?’ And the answer is usually pretty clear.”

I went to see the Sugarhill Gang again this past weekend, having ended up in their new documentary, “I Want My Name Back.” That’s right: I am a middle-aged white suburban mom in a movie about hip-hop pioneers. Or as my friend Janet, who came along with me, said, “Master Gee, Wonder Mike, Grandmaster Caz, Naughty by Nature…and Jen Singer.” 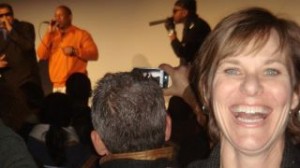 Everything seems so clear now that today is my birthday. I am 4.

Share and Enjoy:
Posted in For Friends & Family, For Parents, Uncategorized | Tagged cancerversary