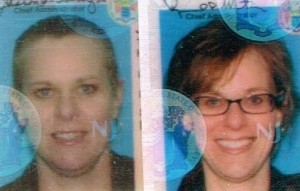 There were two people smiling at the DMV this morning — me, and the lady taking my photo.

“I haven’t been this happy to get a new driver’s license since I was 17,” I told her, fixing my bangs.

I have bangs, I thought. I’m here.

The woman who had taken my photo stared at her computer screen for a few seconds, smiled and said, “You look so happy.”

I had told her that yes, indeed, I wanted a new photo to replace the one taken four years ago when — it figures — my license was about to expire before my hair had returned after chemotherapy. For four years, I’ve groaned whenever anyone asked to see my license. I looked like I’d just returned from a tour of duty in Kabul.

Nobody has asked me then if I wanted to use my old photo, but I’m not sure I would have, anyhow. I wanted to mark what I looked like, and then cross my fingers that I’d make it to January 2012 when my license would expire and I would need to replace it. Along the way, my driver’s license was met with confused looks and nervous conversation.

“Oh, that’s you with your hair pulled back!” decided a notary public.

A guard at the CNN headquarters in New York scrutinized my license carefully, pausing to look up at me several times. I hadn’t felt that nervous about my license since bar-hopping in college.

“I had just finished chemo,” I mumbled, and she reached for my hands.

“My son had leukemia,” she announced, “and he’s okay now.”

“I’m so happy for you!” she announced.

This morning, so was the lady at the DMV. And so is the woman photographed on my new driver’s license. The one with the bangs.

Previous Entry: Do Our Kids Really Need Bald Barbie?
Next Entry: GUEST POST: In Which I Try to Convince Myself