Introducing Chemo Sabe, messages from parent survivors designed to reach that part of you that deep down believes your cancer is ruining your kids’ childhood.

In our first post, Joni Rodgers, bestselling author, non-Hodgkin’s lymphoma survivor and mother of two grown children looks back at how she and her husband minimized the melodrama and kept routines like storytime as sacred rituals. 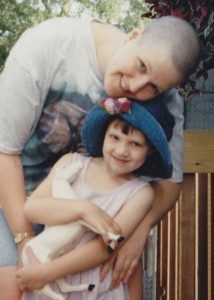 When I was diagnosed with non-Hodgkin’s lymphoma in 1994, my daughter Jerusha was five, my son Ike seven. From downward spiral through treatment to recovery, I was actively sick for about two years. It left a scar on my kids, but it’s part of who they are. And they are fine.

I see now (dang 20/20 hindsight!) I was a lot more traumatized than they were, and my anxiety over their being traumatized made it harder for everyone.

One day during chemo, I scolded at Jerusha, “Say, Missy, you need to understand that the entire world does not revolve around you.”

This should have been my cue to step back and realize that my husband Gary and I had actually done a good job of minimizing the impact cancer had on our kids’ lives. For them, stubbed toes, sandwiches and school projects were still the most important thing happening. We were devastated, terrified and bankrupt; they were scared and confused, but their daily lives remained basically intact.

We calmly kept a stable schedule. Bedtime and storytime were sacred rituals, even if I had to muddle through with a barf bucket. When I was seriously out of it, Gary was the Rock of Gibraltar. I’m deeply grateful to have him as my co-survivor and parenting partner. Our kids grew up with a quietly powerful example of “for better or worse,” knowing that love and laughter can survive
the worst circumstances.

Cancer changed my kids’ lives mainly because it changed me.

There was plenty of drama, so we consciously chose to minimize the melodrama, answering questions and sharing feelings with “just the facts, ma’am” candor. Ike was smart enough to understand the gravity of the situation, but not yet able to process the anger and insecurity swirling beneath the surface. For years, I worried that he was carrying those unresolved emotions and frequently tried to draw him out about it.

But recently, I got this profoundly correct kick in the head from Tom Matlock of the Good Men Project: “Think caveman… Don’t project your complex emotional life on your son.”

Ike was angry and insecure as an adolescent, because he was (hello!) an adolescent dude. Anger and insecurity are in the job description! Constantly connecting nonexistent dots, casting the cancer pall over every struggle in his life, I trivialized issues that were important to him but seemed lame compared to cancer.

About to turn 25, Ike now works as a cable TV technician. He goes daily into the homes of lonely, elderly, handicapped and underprivileged customers. Everyone he encounters is pissed off because the cable is on the fritz. Knowing what it is to feel undirected rage about something over which you have no control, Ike is able to handle it when they lash out at him. He listens to their stories with extraordinary compassion, insight and patience. He’s still finding himself, but he’s a good man, preparing to start a family with a good woman he loves and appreciates.

Jerusha, now 23, is about to begin her master’s degree in international conflict resolution with an Arabic culture immersion course in Egypt. Her fearlessness scares the you-know-what out of me. At an acutely impressionable age, my daughter watched a brush with death strip away my fear of living. She watched me take the road less traveled. Now she’s finding her own way, fiercely independent and (for the most part) unafraid.

Cancer changed my kids’ lives mainly because it changed me. Desperate at the thought of leaving them, I spared no intensity while loving them. It wasn’t easy growing up in the embrace of a mother who’d learned the hard way to seize the day. I didn’t do everything right, but I did my best in a bad situation. Then I forgave myself and moved on, counting on their love to redeem
me in the end.