The Agony and the Irony for Cancer Survivors 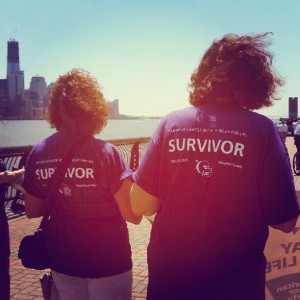 We put on our purple shirts, the ones with “SURVIVOR” emblazoned on the back, and headed around the park.

It was my first American Cancer Society Relay for Life, and it won’t be my last. Though it felt good to share my survivor’s story behind the mic on Saturday in Hoboken, New Jersey, it was the survivors’ lap that reminded me of what I’d been through.

One by one, we took the mic to share three simple bits of information that said it all:

Name…Diagnosis…Amount of time in remission.

There was the woman who is 24 years out from breast cancer. The teenager who’d had his lung removed just this year. The little girl who had leukemia not three months ago. The mom of five a few years out from mixed cell lymphoma. The woman in the long sleeves and floppy hat, now in remission from melanoma. And there was me, Jen Singer, non-Hodgkin’s lymphoma, 4 1/2 years clear.

We lined up behind our banner, and I cut the ribbon to launch the Relay for Life. We headed around the path, the new World Trade Center, still being built, in our view across the Hudson River.

As we headed past the tents and the dunking booth, I saw them out there, lying on the grass in their swimsuits: 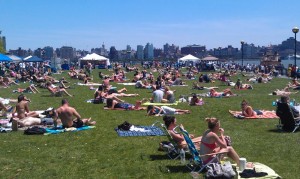 There were sunbathers in the middle of a walk for cancer survivors.

As I listened to a colon cancer survivor describe what it’s like to repeatedly explain to her boss why it takes her so long in the bathroom, I looked over the sunbathers on the grass in the middle of our walk and wondered, Am I the only one who sees the irony here?

After all, the ACS had just handed out sunscreen to the relay’s attendees, announcing that skin cancer is the most diagnosed type of cancer in the United States. And yet here was a park full of sunbathers being looped by a bunch of cancer survivors seemingly oblivious to us, our stories and our collective agony. Oblivious to the statistics, or perhaps, simply unconcerned.

Nobody ever thinks cancer will happen to them.

On the second loop, the caregivers joined us, and we walked around the sunbathers one more time. The mom of five told me what it was like for her during chemo, and how she tried to keep the routine as normal for her children as she could.

“My oncologist told me I was doing too much for my kids,” she told me. “But I was still their mother.”

“I understand,” I replied, thinking of my own two kids, safely ensconced at a Boy Scouts’ camping trip. I didn’t want them to have to revisit cancer with me this weekend.

The mom of five and I shared stories and then hugged good-bye. Then I left the Relay for Life, walking through the sunbathers on the grass in my purple SURVIVOR shirt, and my sunscreen.