I chased her through the hotel, but I couldn’t find her. Then again, Lee Rhodes is tough to keep up with.

She’d just spoken at Mom 2.0, the annual blogging conference held this year in Miami, and I wanted to hear more about how she’d launched glassybaby, a unique, colored glass votive company that employs 70 glassblowers, right here in America.

Most of all, though, I wanted to hug her.

Rhodes, a Seattle-based entrepreneur and mom of three, is also a three-time survivor of a rare form of lung cancer. Diagnosed in 1995 when her kids were very little, she had to endure three separate rounds of cancer treatments, including surgery, radiation and chemotherapy, over seven years, before she finally achieved remission.

Rhodes launched her company after she found hope and healing in the very first glassybaby ever created. In the past decade or so, glassybaby has donated nearly a million dollars to cancer patients who need help filling in where insurance – or the lack thereof – doesn’t. A percentage of the proceeds from the sales of the beautiful votives covers cancer patients’ basic needs, such as bus fare or childcare, no questions asked.

Like I said: I want to hug Lee Rhodes.

Six weeks after Mom 2.0, I caught up with Rhodes by phone, and asked her to share what she means when she reminds people to take that deep breath we often forget to take.

“It does bring you a bit of calm and balance that we lose during the day doing too many things,” says Rhodes, who admits she’s still teaching herself how to take that deep breath. She observes that breathing “is the one thing that is necessary that you can control.”

When she was in cancer treatments, Rhodes saw too many other patients lose that sense of control. During chemotherapy, she recognized that she while she fortunate to have good insurance, childcare and friends and family to help her out, other patients at her treatment center weren’t as lucky. She remembers that some patients skipped chemo because they couldn’t afford the bus fare to the treatment room. 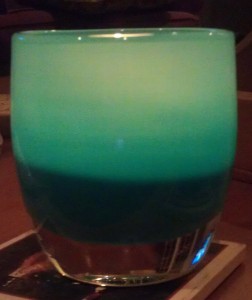 “It’s powerful when people die when they can’t get their basic needs met,” says Rhodes, now a decade in remission. So when glassybaby started making money, she decided to use her success to help patients like the ones she’d seen in chemo by donating money to meet their needs, whether that need is groceries, “unrestricted cancer care, a sandwich or blue jeans,” says Rhodes. It’s part of glassybaby’s philosophy: “The more you have, the more you give,” says Rhodes.

She hopes that each glassybaby brings light and healing to everyone who gets one. Indeed, Rhodes sent me one in a
beautiful blue called cabo, and I found myself staring at it and thinking of all the people I’ve known who had cancer and survived, and those who didn’t make it.

When I asked her what she’d tell a parent with cancer, and she said this:

“Parents with cancer need to know that they’re going to be afraid and do terrible things with that fear, bad and good choices. The fear will bring out the worst of you, but it will bring out your best and make you stronger. You’ll come out the other end stronger.”

Ah yes. Thanks for the hug, Lee Rhodes.

Share and Enjoy:
Posted in For Children, For Friends & Family, For Parents, For Spouses & Caregivers, Parents with Cancer | Tagged chemo sabe, survivors

Previous Entry: CHEMO SABE: Jim Higley on the Worst Part of Parenting with Cancer
Next Entry: Telling the Kids Mom or Dad Has Cancer