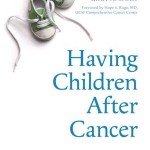 Gina Shaw, author of “Having Children After Cancer: How to Make Informed Choices Before and After Treatment and Build the Family of Your Dreams”, joins us at Parenting with Cancer to discuss fertility and cancer:

Parenting with Cancer: What’s the first thing a young person with cancer needs to know about preserving fertility?

Gina Shaw: Don’t expect your doctor to bring it up! The American Society for Clinical Oncology issued guidelines on fertility preservation and cancer back in 2006, which urged oncologists to discuss all their options with patients in their reproductive years, but surveys done since then have found that this often doesn’t happen. Even when they do talk about fertility with their patients, they rarely (less than 25% of the time) take the next step of referring them to a fertility specialist.

PWC: What should you expect from your oncologist when it comes to fertility (and when should you switch doctors?)

Shaw: At a bare minimum, your oncologist should not dismiss your fertility concerns as unimportant. Oncologists naturally focus on treating the cancer and keeping you alive. But they need to remember what they’re keeping you alive for.

Quality of life issues like fertility and sexuality are more on oncologists’ radar screens than they were in the past, but there can still be a tendency to have tunnel vision: deal with the cancer now and we’ll think about all those other things later. But by not addressing them at the outset, you may be making a decision that you can’t undo, without even knowing that you’re making it. An oncologist should be willing to refer you to a good fertility specialist—ideally an oncofertility program, but there aren’t nearly as many of those—in your area.

If your doctor is totally unwilling to discuss or consider the idea of your becoming a parent in the future, then it’s time to switch. You want an oncologist who sees you as a whole person, and if having children someday is important to you, then it should be important to your oncologist too.

PWC: What should men know about fertility and cancer?

Shaw:Men past puberty are in a reasonably good position for preserving fertility. Unless they are in extremely dire circumstances medically, it’s almost always possible for them to get to a sperm bank and bank sperm before undergoing any kind of potentially toxic treatment.

Even Lance Armstrong, who was in pretty bad shape by the time he was diagnosed, was able to do that, and it obviously worked for him. Ideally you should go in to bank sperm at least twice, 48 hours apart, but some guys don’t have a window for that—for example, with certain aggressive leukemias. Once is better than nothing! If you don’t have a sperm bank near you, you can even do sperm banking by mail through a partnership between Fertile Hope and Livestrong: http://www.liveonkit.com//.

PWC: What should women know about fertility and cancer?

Unfortunately, fertility preservation for women with cancer is a more complicated proposition than it is for men. Most adult males can just go to a sperm bank, watch a racy video and head out an hour later with their future fertility protected.

Women have to go through the whole egg stimulation and retrieval process to do either embryo or egg preservation. It’s important to know, though, that in most cases, although cancer is an emotional emergency, it’s not an immediate medical emergency. That is, you can spare the 2-4 weeks it might take to do an egg retrieval cycle before you start treatment. Women with breast cancer, for example, can usually do this if they want to (and there are ways to stimulate egg production that do not use hormones that might feed the cancer). Some other blood-borne cancers, like leukemia and lymphoma, might not allow for this time window before starting treatment, though.

PWC: What was the hardest part for you when it came to having children after cancer?

Shaw: Honestly, the roller-coaster wait during our adoption journey with our oldest daughter. We had three different “matches” that seemed very promising fall through, and it was agonizing. The worst, I think, was coming home from traveling to Florida over Thanksgiving, having expected that we would be bringing a baby home for the holidays, with an empty car seat. But just three months later our beautiful little girl was born and we were in the delivery room with her amazing birth-mom when she came into the world. From that moment on, it was all worth it.

PWC: Which cancers/treatments are the most and least likely to affect fertility?

Shaw: Most of the time, it’s not the cancer itself that affects fertility, although there are some that do, and some cancers appear to be associated with fertility problems even if they don’t necessarily cause them. Researchers have found that BRCA-positive women, for example, have higher than average rates of fertility problems.

The big issue is how cancer treatments affect fertility. Chemo, radiation and surgery can all have an impact on your ability to conceive or bear children, depending on what kind of cancer you have. Obviously, if you have uterine cancer and have a hysterectomy, that pretty much precludes pregnancy entirely. Radiation, if directed at the pelvic area—as it would be for ovarian or testicular cancers–can cause infertility. But probably the biggest issue is with chemotherapy.

Some types of chemo are more toxic to the ovaries than others; the worst appears to be the alkylating agents, which would include cyclophosphamide (Cytoxan). Others, like the taxanes, don’t appear to be as bad for fertility.

Hormonal and targeted therapies, like tamoxifen and Herceptin, don’t appear to have a significant impact on fertility in and of themselves, but tamoxifen can be a big deal just because ideally a woman takes it for five years post-treatment, and you cannot/should not get pregnant while on tamoxifen. Research definitely shows that five years of tamoxifen is better than two or three at preventing recurrence, but if you finish cancer treatment at 33 and you’re worried about a closing window of fertility, staying on tamoxifen for five years puts you at 38. A lot of women really struggle with whether or not to “take a break” from tamoxifen to get pregnant. I know several women who have done that. Their oncologists weren’t exactly happy about it, but these women weighed the risks and chose what felt right to them.

PWC: What happened that you didn’t expect when you decided to have children after cancer?

Shaw: Everything! Seriously though, we had decided—after some epic angst and battles—that pregnancy after cancer was not for me. We went through a roller coaster of a process to adopt our older daughter, which was worth every moment (even the ones I spent curled up into a ball on my bedroom floor, crying and throwing things at the wall after yet another possible adoption fell through and I was convinced we would never have a child). So what I definitely did not expect was that I would ultimately decide to go ahead and try to get pregnant, or that I’d be able to get pregnant, pretty easily, at 40 and again at 43, and have easy, uncomplicated pregnancies and deliveries.

PWC: If you could tell someone struggling with fertility after cancer one thing, what would it be?

Shaw: If you have love to give to a child, if you want to be a parent, there is a way for you to do it. Don’t give up. You didn’t give up when you got your cancer diagnosis, so don’t give up on your dream of being a parent. How you build your family may look very different than you imagined it when you were 12 and playing the “Game of Life,” and it may be a much more challenging path than many of your friends are taking. But it will all be worth it when you hold your child in your arms.

Shaw: Two of the best fertility and family-building resources for people with cancer are the Oncofertility Consortium (oncofertility.northwestern.edu) and its “Fertline” (866-708-FERT), and Fertile Hope, now a part of Lance Armstrong’s Livestrong Foundation (www.fertilehope.org).

Gina Shaw is an award-winning medical, science and health writer whose articles have appeared in Redbook, Self, Clinical Oncology Today and more.