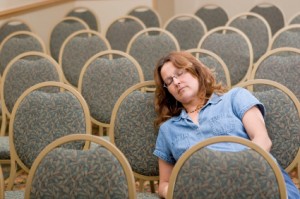 To play on the tagline of my blog, I often feel like hell, but I don’t usually look like it.

So it’s hard for people to imagine the careful strategizing that goes into allocating my very finite, very uncertain time and energy. I have anywhere from 8 to 12 good hours a day, and in that, I must attend to my health, my family, my job, and hopefully, some of my important relationships.

It’s the usual working parent juggling act, only performed on a tightrope.

As a result, I have learned to say no to things. I have become extremely discriminating about commitments, making sure they serve important goals before agreeing to them.

The place I have had the hardest time is in parent communities.

Even before I was done with treatment, I was approached by a PTA president asking me to volunteer for something. I responded quite directly (perhaps curtly — I don’t remember — thank you, chemobrain), explaining that this would not be possible right now and most likely not for some time.

The requests do not end, and for the most part, I have gotten over the guilt of having to beg off.

“I have anywhere from 8 to 12 good hours a day, and in that, I must attend to my health, my family, my job, and hopefully, some of my important relationships.”

But then today, I ended up in a parent meeting that was really not a good use of my time. I had originally intended to forgo it –– it was a three-hour meeting –– but had been told directly about its importance. So I skipped my Sunday morning exercise, planned to delay my errands, and made room in my calendar to attend the meeting, not entirely certain how everything else was going to get done.

As the content of the meeting and its irrelevance to me became apparent, I felt myself fuming. I tried hard to talk myself down: They have no idea of the energy calculus that goes into every choice. This might actually have a lot of good if you had the time and energy for it.

The best I could do initially to contain the belligerence burbling inside of me was to avoid eye contact, look at my phone, and just kind of shut down. I quickly realized that whatever good this conversation had to offer would be lost on me.

At the most convenient moment, I made my exit.

On the way out, I caught up with one of the organizers. I tried hard to be a mature grown up, but all my buttons about recovery and struggling to keep up, let alone add in a three-hour parent meeting, had been pushed hard.

With perhaps a little too much desperation, I explained my situation. I explained that my schedule is a zero sum game, that there are no extra hours to be squeezed out of a day by sacrificing sleep. The time I have is the time I have, and it’s often less than I think. I explained that, in the future, I need to get a full agenda so I can come for the most relevant parts.

I am not upset at the organizers. They did not mean to put me out, and were only kind and compassionate once I explained my limitations. I am not upset at the other parents. I am coming to believe that, no matter how empathetic people are, our imperfect humanity limits our ability to fully imagine other people’s circumstances. In the end, this organization assumes families have healthy parents whose Sunday mornings are free.

Lani Horn is a wife, mother of 3, and a professor at Vanderbilt University. She blogs about the social and emotional affects of cancer treatment and survivorship at http://chemobabe.com.

Previous Entry: PARENTS WITH CANCER: “Push Yourself to Get Up”
Next Entry: The Dirty Little Secret of Moms with Cancer