Why Protecting Your Kids from Your Cancer Can Hurt Them 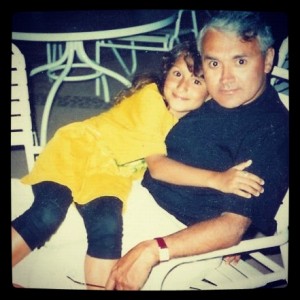 Cristina Rivera around age 9, with her father, Victor, who passed away from colon cancer at age 56.

The first time her father got colon cancer, Cristina Rivera was in middle school. He had surgery and chemotherapy and was cancer-free for a few years.But when Cristina was a freshman at Princeton University, her dad’s cancer returned.

“At the break, my parents told me it’s back and it spread,” recalls Cristina, a freelance writer in Brooklyn. “They were optimistic, saying ‘We’re gonna beat it.'”

But Cristina sensed it was worse than her parents were letting on. The details of his prognosis seemed fuzzy to her, but she knew the cancer had metastasized to her father’s brain.

“I was like, ‘Wow. I can’t see him getting better’,” she says. And yet, her parents remained optimistic — at least around her. When the oncologist began to explain the situation to her parents and Cristina, “my mom shooed me away.” But she knew that the tone the doctor was using meant that her dad wasn’t going to get better.

Cristina doesn’t fault her parents, whose optimism was rooted in their devotion to their religion. Her mother went to church every morning and every Sunday mass. Besides, she says, “Who wants to tell their kid, ‘Your dad is probably going to die’?”

When school started back up in the fall, Cristina considered staying home, but her mother said, “I don’t want you to worry about this. Focus on your school work the best you can,” recalls Cristina.

Cristina’s father had passed away.

“I knew the prognosis was bleak, but I didn’t realize he was so close to death,” says Cristina, who says she would have liked to have spent her dad’s final weeks with her parents. “I regret wishing I was there to say goodbye.”

Cristina’s story is typical of parenting with cancer. We parents want to shield our children from the worst of our cancer, but in the process, we can rob them of their emotional rights to process and grieve in their own way. Being age appropriately forthcoming about illness, treatments and even death is crucial to the long-term effects of cancer on your kids.

“The most important thing is to be honest,” says Cristina. “Kids can sense when things are off.” While she understands the instinct parents have to protect their children, she says, “Either way, they’re going to be hurt. So it’s better to prepare them than for them to be blindsided.”

She advises children of parents with cancer, “Let yourself be sad and let yourself cry.”

She suggests that families look outside themselves for help. She credits a support system of church members and neighbors for helping her parents through the toughest of times. “When friends came, my dad could lighten up a little bit,” she remembers. “I saw a bit of his old self peeking through.”

Previous Entry: Be Awkward: Teach Your Sons to Check for Testicular Cancer
Next Entry: PARENTS WITH CANCER: “Anger Hurts.”