My Parent Has Cancer and it Really Sucks

When your parent has cancer, it’s most certainly a tough time, but there’s an added dimension of difficulty when you’re a teenager. You’re not quite an adult, and yet you’re likely to feel like you need to step up and act like one.

Maya and Marc Silver understand what it’s like for the million or so teens whose parents have cancer each year. The daughter-father team from Chevy Chase, Maryland, have written, “My Parent Has Cancer and It Really Sucks: Real-life Advice from Real-life Teens” (Sourcebooks 2013), a  guide that encompasses their own experiences — Mom had breast cancer — as well as input from medical professionals and other teens.

In 2001, Maya’s mom Marsha was diagnosed with bilateral breast cancer, which resulted in lumpectomies, six cycles of chemotherapy, and radiation. Maya then 15, felt she had to become a parent figure to her little sister, whose bat mitzvah was  scheduled for a month after their mom’s diagnosis.

Parentification
This is what Maya and Marc refer to as “parentification,” when roles shift and teens have to take on more adult responsibilities. Marc says, “Cancer robs people of their childhoods,” and teens can feel it the most. “You may feel like you have to lean on your teen,” he explains.

The Silvers interviewed about 100 teens for the book, and found several common issues. For instance, teens feel like they have to protect their parents from bad news, such as poor grades, or personal issues, like boy/girlfriend trouble, that they used to share with their parents.

Conflicting Emotions
Maya says that teens often have “weird anger.” (i.e. “I’m trying to become who I am and you’re telling me I have to deal with this!”)

Some teens feel guilty for having fun when a parent has cancer. Others lament dealing with the cancer publicly, feeling embarrassed by their parent in a headscarf, or as Marc says, “Why is your mom so bald and so cranky?” 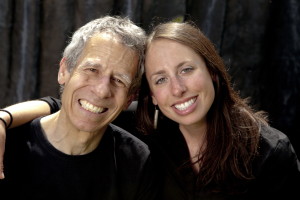 Marc and Maya Silver, co-authors of “My Parent Has Cancer and it Really Sucks.”

Dealing with Friends
The Silvers warn teens that their friends may not know how to act around them, which can create a rift in friendships.

“It’s not their fault that they don’t know how to talk to you,” says Maya, who suggests, “Tell your friends what you need from them.” That means if you feel like hanging out, tell them, and if you don’t want them to say “I’m sorry” about your parent’s cancer, tell them.

Communication and Support
Marc recommends making sure that your teen has a go-to person outside your immediate family to confide in, such as an aunt, uncle or other family member, or a guidance counselor, teacher, coach, or other trusted adult. He also warns parents not to overshare with their teen, mistaking their maturity level for an adult’s.

“There are some things you don’t share with the kids,” he warns.

He adds that it’s important to share with your teen what kind of help you need from them. When his wife Marsha was one day post chemo, he found the kids watching TV, and it didn’t sit well with him.

“I exploded at the kids, and I was being Super Dad,” he admits.  “I asked, ‘Can’t you guys help me?’ and they said, ‘Well Dad, if you just ask…’ It’s so important to talk about what you need and how we are doing.”

Both Maya and Marc recommend finding other teens in the same situation who understand, either through a support group or places like Camp Kasem, a college student-run summer camp for kids ages 6-16 with a parent with cancer.

That’s where the Silvers met one teenager who told them, “My real age is 16, but my cancer age is 40.”

Yep. Cancer sucks. But the book? That is perfect for the teen whose parent has cancer.

Share and Enjoy:
Posted in Featured, For Children, For Friends & Family, For Parents, For Spouses & Caregivers | Tagged advice, books, teens

Previous Entry: The Breast Cancer Checklist
Next Entry: After Cancer: A Message to Mom