Widowed Fathers Find Hope and Help in Each Other

At Parenting with Cancer, we don’t like to sugar-coat the painful parts of cancer. Cancer sucks, and bad things can happen to good people. As such, we were struck by this wonderful program for fathers who have lost their spouses to cancer, and felt compelled to share it with our community for those in need.

“Men have a tendency to suffer in silence,” says Justin M. Yopp, PhD, a founder of the Single Fathers Due to Cancer Program at the University of North Carolina at Chapel Hill. “That’s a problem enough, but when there’s children in the home, that’s more of a problem.”

So Dr. Yopp, along with his team, Donald Rosenstein, MD, and Eliza M. Park, MD, run the program as part of the university’s Comprehensive Cancer Support Program, to help single fathers due to cancer cope with the loss of their wives or partners, meet the demands of parenthood, and manage their children’s grief. It’s a tall order, but it’s a very important one, because, Dr. Yopp explains, how a parent copes with grief as a direct impact on his children.

At first, the plan for the group was to provide a parenting/grieving conflict, but that got abandoned quickly.

“They were more interested in talking and hearing each other’s stories,” reports Dr. Yopp, Assistant Professor of Psychiatry at UNC. “Once they’re in the door, there’s no lack of ability to express emotions and process feelings. Our guys are open books in there.” And that was a surprise to him and his colleagues, who expected more reticence among the widowed men, who often don’t care for support groups.

“This group has been together over two years, but we never planned on it going that long,” he shares. In those two years, the group has tackled many emotional and parental issues, including how to talk about and honor Mom, establishing new traditions and rituals, how to discipline and nurture the kids, and resuming dating. One father recently grappled with filling in for Mom when a daughter hits the teen years. 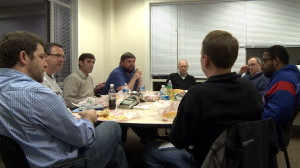 “Having a mom who died from cancer makes you different or it makes you think it does,” explains Dr. Yopp. And not talking about it, he says, confuses the children.

A few mothers with terminal cancer have reported that the group provides them with reassurance that there’s something out there to help their families through the loss.

“Our dads are so interested in paying it forward, that they helped create the
web site and videos,” he adds. A new group starts at UNC in a few months, and Dr. Yopp hopes other groups will follow their model and launch elsewhere in the country. If you’re interested in starting a group, visit the Single Fathers Due to Cancer contact page.

“When we get a mass [of widows] in a certain area, we’ll partner up with a local provider. We won’t oversee it, but we’ll make the connection.”

Previous Entry: After Cancer: A Message to Mom
Next Entry: Overdue Permission from a Cancer Survivor