What the Kids Would Tell You 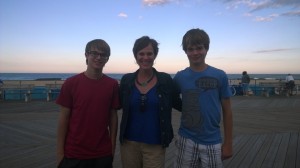 My boys and me in Asbury Park, NJ, this month.

This afternoon, I asked my kids what they would tell parents just diagnosed with cancer about how to handle parenting with cancer. My boys were 8 and 10 when I was diagnosed with stage III non-Hodgkin’s lymphoma seven summers ago, putting them smack dab in the middle of their childhood.

I was sure I had ruined it for them.

So I was nervous to ask them what I did right and what I did wrong the summer (and fall) I had lymphoma when it came to parenting with cancer. But I was going to appear on The Stupid Cancer Show to talk about parenting with cancer, and I thought that their insights as teens who endured cancer in the family would be as helpful if not more than mine. So here goes, the good, the bad, and the ugly:

Tell them. They feel that if kids are old enough to understand, you should tell them you have cancer. Keep it age appropriate, of course, but don’t try to hide it because they know when something isn’t right.

Keep them busy. They said that they were so busy with play-dates and other activities, it kept their minds off my cancer.

Think twice about taking them to the hospital. So, I was an emergency case, and wound up in the hospital while my kids were in school. Two days later, I asked my husband to bring the kids to the hospital so I could tell them why Mom wasn’t home and how I would be okay, but I would need medicine and more time in the hospital. Seemed smart at the time, but both boys says that seeing me in the hospital bed frightened them. Would it have been better to wait a few days until I was home again? Probably, they said.

The healthy parent should step up. A little alone time doing something fun with the non-sick parent would make them feel better that there’s some normal still left.

Goodies are good. In the scary, turbulent early days after diagnosis, some friends of mine sent my boys care packages every day. That was a huge plus, they said.

Keep something normal. Okay, so we happened to be having house-wide construction at the same time. (My friend Cheryl stood in the middle of my ripped-up kitchen and said, “If this house isn’t a metaphor for what’s happening with you, I don’t know what is.”) Add that Mom was gone for most of June and the first week of July, and very little was normal. But hanging with their usual friends was important, they said. While they enjoyed going to other people’s houses (and swimming pools) that they’d never been to, they said they felt like those families were trying so hard to be extra nice, and it made them feel pitied.

Be Mom (or Dad). Even if I couldn’t be the mom I was before cancer, there was still me in there, and they were happy to see me whenever I could be there for them.