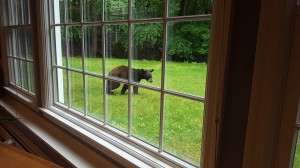 This afternoon, a baby bear rambled past my window. That’s just about the most exciting thing to happen to me today.

Oh, and I wasn’t diagnosed with cancer for the 10th June 6th in a row.

That’s pretty remarkable and yet not exactly a “cancerversary.” That comes in November when, if all goes well, I’ll be considered 10 years clear of cancer.

Still, June 6th–which is, by the way the anniversary of D-Day–always makes me stop and think about what I was doing on that morning in 2007.  I had a needle biopsy of the softball-sized tumor in my chest, and then the oncologist at my local hospital gave me the bad news — it’s lymphoma, probably Hodgkin’s.

Nurses and doctors would spend the next two days assuring me that’s the “good cancer,” because it’s highly curable. But it was, in fact, non-Hodgkin’s lymphoma, the, um, “bad cancer,” because the odds for a cure aren’t as high. And yet, I’m still here 10 years later.

I’ve spent June 6ths since then doing more interesting things than I’ve done today. One year, I took the kids for a weekend holiday on the boardwalk in Asbury Park, New Jersey, where we ate Cuban food and surfed the waves, though not in that order, of course. I bought a hat, and we played pinball. One year, I watched the Enterprise space shuttle being ferried up the Hudson River to its new home at the Intrepid Sea, Air & Space Museum. Once, I attended a neighborhood barbecue where a large bear showed up, but we shooed it away by making a lot of noise.

While those were surely extraordinary June 6ths, I take solace in the fact that I can still have ordinary ones, because those are the days I missed the most when I was hooked up to a chemo drip. I missed doing the everyday stuff that we take for granted. The stuff we might not bother to journal or tell our families about at the dinner table. So today, I was extraordinarily happy for the ordinary things I did.

…made a sandwich for my 20-year-old, who was running late for his summer job.

…went to the gym.

…made a dentist appointment.

…wrote and edited a few assignments, and accepted a couple of meeting invitations.

…filled out a mortgage application.

…talked to a friend on the phone.

And I saw a baby bear ramble past my window. Okay, that was a little bit extraordinary, even for summertime in my neighborhood. But it’s a good reminder that if we are handed the privilege of living, the ordinary will be punctuated by the extraordinary. Yet all of it is a beautiful luxury, from the mortgage application to the dentist appointment to handing a sandwich to my college kid, who almost grew up without a mother.

It’s not that I treasure each day for the gift that it is, stopping to smell every flower and Instagramming each smile. Rather, I spend June 6th grateful for the treasures that I don’t notice much of the rest of the year, because they have once again become commonplace.

I talk to friends on the phone.

I fill out paperwork.

Previous Entry: To the Mere Mortals of Cancer