You are here: Home / Jim Higley 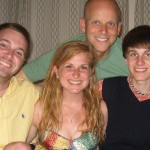 CHEMO SABE: Jim Higley on the Worst Part of Parenting with Cancer

The worst part is that all three of my children fully expect to receive their own diagnosis of cancer. Someday.

Bobblehead Dad: How I Told My Kids I Had Cancer

By Jim Higley You’d think it would be simple to get an official cancer diagnosis if, in fact, you had the big “C.” It wasn’t simple for me, however. It was a six-month journey during which blood tests “looked suspicious” and biopsy after biopsy revealed nothing. Details of a prostate biopsy aren’t something you want […]